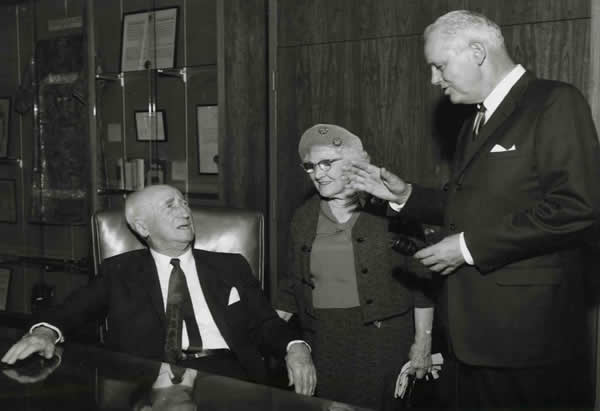 I would like to begin by telling you one of my favorite James F. Byrnes quotes; "When a youngster calls me Jimmy, I know I’ve got his Daddy’s vote." Now to me this quote brings up two great points about this man. First, he was a humble politician and servant who valued the importance of relationships and second, that he never forgot where he came from even when he reached the highest positions in Washington. I think these are points we could all learn from. This quote is predominately displayed in the James F. Byrnes room in the Cooper Library at Clemson University.

First, Governor Byrnes was appointed a Life Trustee of Clemson in 1941. Some twenty years later he donated a lot of his papers and things to Clemson’s archives. Clemson used some of the things he donated to create a room honoring him on campus in the library. The room was dedicated November 26, 1966, at a ceremony both Mom and Pop Byrnes were able to attend. The room did not change for the better until a man had the idea to do something about it. I am honored to call this man a friend of mine, a man that we all should strive to be, and a great testament to the Clemson family. Ward Buzzell has dedicated most of his life to making Clemson a better place.

Blue Key Honor Society is a national honor society founded at the University of Florida in 1928. Clemson received its chapter in 1932, and it is one of Clemson’s oldest honor societies. Since 1932, Blue Key has inducted a little over 1400 members who represent the Top 1% of students on campus in areas of scholarship, leadership, and service. James F. Byrnes was made an honorary member of Blue Key in the late 1930s. Blue Key’s motto is a mantra that I think Governor Byrnes would have enjoyed, “Serving I Live.” Blue Key, since 1932, has done many service projects on and off of Clemson’s campus. These projects range from the yearly student-run pep rally Tigerama to projects on campus like the Byrnes room. There are many other members of Blue Key who couldn’t be here today that played a key role in this project in addition to Ward and myself.

As many of you know, especially the ones from Super Weekend, I am big on challenges and would like to leave you with one. I challenge you all to find something special to you whether it is in your house, your community, your school, office, church, whatever it may be, and make sure that you care for it while not growing complacent with it over time. Now what do I mean by this? The Byrnes room slowly deteriorated over 40 years and no Clemson student, employee, or alum did anything about it expect watch until Ward came along. We cannot let historical, priceless, or sentimental places of interest to you fall by the wayside. You don’t have to be the one who donates the money; just be the one who makes it a priority to get something done. If we all try to do this, imagine just how beautiful this world will be. Thank you very much! 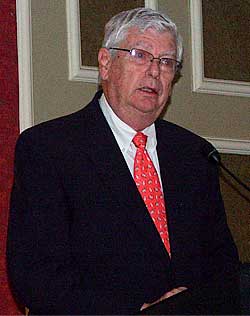 I want to thank you for inviting me to meet with you today. You are an auspicious group. As Tyler may have told you, Jimmy Byrnes is one of my favorite Americans, certainly my favorite South Carolinian. When I was asked to speak about the renovation of the James F. Byrnes Room in the Clemson University library, I didn’t hesitate in accepting. Anything to perpetuate the memory of this outstanding statesman.

I don’t recall when my love affair began with Governor Byrnes. Probably about the time I learned that President Roosevelt had twice deceived him about becoming his vice presidential running mate. This led me to reading the biography, Sly and Able – today my copy is a bit tattered from reading it over the years. In 1982 our oldest son entered Clemson to study architecture and a year later I was invited to come to see him get an architecture award. With a little extra time on my hands I wandered into the library and to my pleasant surprise I saw the entrance to the Byrnes room – I had not heard of the room. But what I saw in the room was not so pleasant. To be brief, it was a lousy tribute to one of South Carolina’s most prominent statesmen, in my opinion second only to John C. Calhoun. Across the library foyer was the Edgar Brown Room which had a most dignified display for the state senator, certainly not like the shabby treatment given the Byrnes room. I discovered that Brown was nothing in comparison to Byrnes, that the room had been provided as a political gesture and not in any sense for his greatness.

When I got home I wrote a very polite letter to the librarian suggesting that attention should be given to improve the quality of the room, but I never received a reply. Two years later, still appalled at the condition of the room, I wrote another letter – not quite so polite. When our youngest son graduated I again checked into the room and it remained untouched, still in its deplorable condition. In reality it was nothing more than a passageway for the librarian to take to get to his office. In 1992 my wife and I retired to Clemson and I began trying to find a way to get the room refurbished as an appropriate tribute to Governor Byrnes, but every idea failed. However, in 2005 I was made an honorary member of the Blue Key National Honor Society, a group of the top one percent of Clemson students both academically and in terms of leadership (I throw that in for Tyler’s sake – he is a member of Blue Key).

In Blue Key I saw an avenue whereby the room might be brought up to a semblance of dignity befitting Gov. Byrnes. The membership voted unanimously to undertake the project. We put together a Blue Key committee of five members and we began making plans. We got President Jim Barker’s approval of our plan, so we were off to the races, the only obstacle being the librarian who insisted he have the right to modify and final approval of our plans. Fortunately, he retired during the planning and the new librarian agreed with our assessment of the room. However, we needed to raise the money for a budget of 50 thousand dollars.

Luckily one of our Blue Key members was noted for her fund raising ability, so we took her to dinner to persuade her to join our group. You could see her face light up as we described our plans for the project, and she became eager to help. That evening she described the project in enthusiastic terms to her roommate, who just happened to be the daughter of an influential state senator. She got so excited she called her father that same night and he too became so enthused he said he was going to introduce a bill in the legislature the next morning to fund the project. However, this was not so good because I now was in a real pickle. I knew Pres. Barker was to be meeting with the senator’s committee the next morning and it would appear to Jim Barker that we were blindsiding him. We weren’t – this all happened in a matter of four or five hours one evening. I sent an e-mail to Pres. Barker explaining the situation, hoping his secretary would read it and forewarn him while he was in Columbia. She did, and the upshot was that Barker told the senator that Clemson would pay the tab, apparently hoping to avoid the embarrassment from the public knowing Clemson had allowed the room to fall into such a disreputable condition.

So, with money in our pocket we went to work, and in late May of 2007 President Barker and former president Bob Edwards cut the ribbon for the unveiling. Some of you were able to be there for the occasion. I hope that whenever you are in Clemson you will stop by and visit the James F. Byrnes Room – I think you will be pleased and proud.

As a student I saw Jimmy Byrnes a few times from a distance, but I never had the opportunity to meet him. When he was on campus for a trustees’ meeting he would inevitably stand on the rise above the parade ground to watch us cadets pass in review. I can still see him now. He may have been a small man in stature, but what a great man – a giant of a man – he was in real life.