The Byrnes Adopted Us 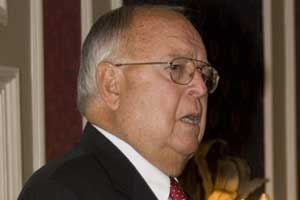 Before I begin my remarks, I think it would be good for me to clear one thing up. Over and over today, I have heard people talking about how in the world the 1949 scholars could look so good after all of these years. I need to tell you that when we received our scholarships, we did not have to be but 14 years old!!!

Now that I have cleared that up, I must tell you something else. I have really been blessed during these years, and I have been able to attend every luncheon. I think that today is absolutely one of the best that we have every had. Thank you, Natalie, and our Byrnes Scholars Board. You have done a great job!

Normally, when a couple goes through the process of adoption, they will choose one or two children. Not so with James and Maude Byrnes! They chose 30. Hundreds more were to come, and ultimately up until this day, there has been over 1,100!

I first realized at our initial meeting in Spartanburg in 1949 that we were surely “more than money”! I felt the love of these two people immediately. With newspaper reporters present from all over the U.S., and Twentieth Century Fox filming our day… WE were the center of attention for these two … and how special we were made to feel.

When we spent our first weekend with them at the Isle of Palms, they did not stand back and observe us… they square danced, joined in swimming in the ocean, and physically and emotionally became a part of our lives.

As time went by, that love became more and more personal. Every time a card, a letter, a telephone call, flowers, visits … every contact received a response. Often, it was more than a thank-you note. It might be a word of encouragement or an invitation to come and visit.

I never failed but one course in my life. Being the brilliant person that I am, I have never understood it. I wrote to “Pop” Byrnes, confessed my failure, and suggested that he revoke my scholarship. He replied that he thought that it was time for me to start studying! There were a number of times that I “got smart” with him, and he seemed to really enjoy it. He simply “got smarter”.

Another way that they proved that we were their “adopted children” was that they liked to brag on us! All of us know how much parents like to brag. Let me give you some examples of this.

One example was my graduation exercises at U.S.C. in 1953. The late Senator Walter George, one of the most distinguished senators in congress, was our graduation's speaker. I walked up to him and “Pop” Byrnes in the crowd, and “Pop” Byrnes said, “Senator, this is the young man that I was talking about”! I can’t tell you how I felt. I certainly realized again that it was “more than money”.

On another occasion, General Lucius Clay, the Deputy Military Governor in Germany, in charge of the Berlin Air Lift, was the speaker at one of our luncheons. “Pop” Byrnes wanted a couple of his boys to meet the General at the airport with him! THEY REALLY WANTED TO SHOW OFF THEIR CHILDREN!

Two days before his death in 1972, I stopped by their home to visit with “Mom” Byrnes… knowing that he was too ill to see me. He hears my voice, and requested that I go to his room. I reminded him that I was one of his “preacher boys”, and that I had the right to pray for him. I knelt beside his bed, feeling the firm grip of his hand, and we prayed together. Before leaving, I told his nurse that “this man had done many great things during his lif time, but the greatest of all was awarding me a scholarship”. With a sweet smile, he replied, “And I didn’t even know it”!

A long line of their adopted children followed his casket from the State House to the church … and then lined the route on both sides as his casket was taken from the church to the grave!

Four years later, at her request, eight of her “adopted sons” served as her pallbearers. A large number of her children lined the route from the church to the grave!

We were there to see them off to their eternal home in Heaven … but never to let them go! For they will live in the hearts of their children, their children’s children, and generations to come … branded by the love of “Mom” and “Pop” Byrnes!